Nov 4, 2015 | Roz Morgan Thomas Edsion once said in an interview, and I am ad-libbing here, that it was the 100’s of failures  in his experimentsthat resulted in his discovering a  light bulb. I am no exception. During my 10,000 hours of day to day consulting and pouring over colour,  I have had some memorable failures. Although I will admit that success is a great motivator, what I have learned from my mistakes has been invaluable.

LESSON ONE: NEVER EVER TRY TO  VERBALLY DESCRIBE A COLOUR This may seem obvious but I cannot count the number of times a client has tried to verbally explain the colour they want. This just cannot work.  Kelly green to one person is mint green to another.  I  learned this mistake the hard way early on. I had bugged my parents endlessly about repainting my room and choosing my own colours. Finally we moved and my mother gave me carte blanche. I decided I wanted a beautiful gold wall behind my bed, a soft almost silver gold, so  rich, so yummy 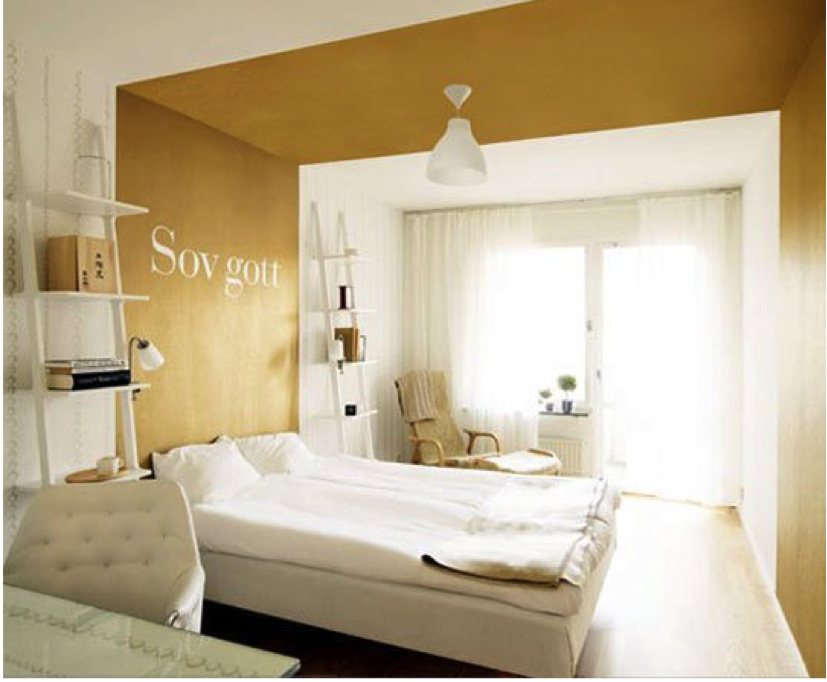 . And then, beautiful creamy walls. Sort of like this picture from Apartment Therapy     I was thinking of a soft burnished gold with creamy walls like the canned Devon cream my grandmother sent every Christmas. 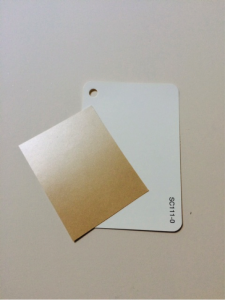 Instead I got a colour something more like this bowl of roasted squash soup with apple and a splash of Yogurt. Beautiful in this bowl but not so much on my walls. The creamy walls like my grandmother’s beautiful clotted cream were as white as the yogurt in this picture. Sterile and awful in my room. 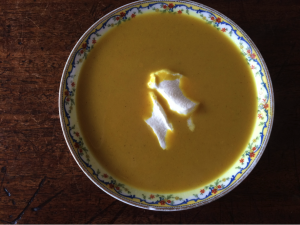 Of course my parents absolutely refused to repaint it and I had to live with it. I cried for days until I could collect enough posters to cover it up. I called it my baby poo wall for a long time. Never trust anyone who says they know exactly which colour you are talking about until they show you a chip!.  They cannot possibly know. LESSON TWO: DON’T RUN TO THE PAINT STORE AND WALK AWAY WITH A CAN OF PAINT I am not the first nor will I be the last person to do this. I have been in the paint store countless times and have watched desperate people trying to choose a colour from the chip rack. They want to leave with a can of paint. They want to do the last minute paint job. All I can say is DON’T DO IT. I had bought my first house and I had my own work space. I was so excited because I could actually have any colour I wanted. So I went to the paint store. I picked this beautiful pale pink colour chip expecting it to look like this beautiful pink on the walls of this lovely office. Feminine, right? I had the paint mixed, ran home with it and handed it over to my painter. 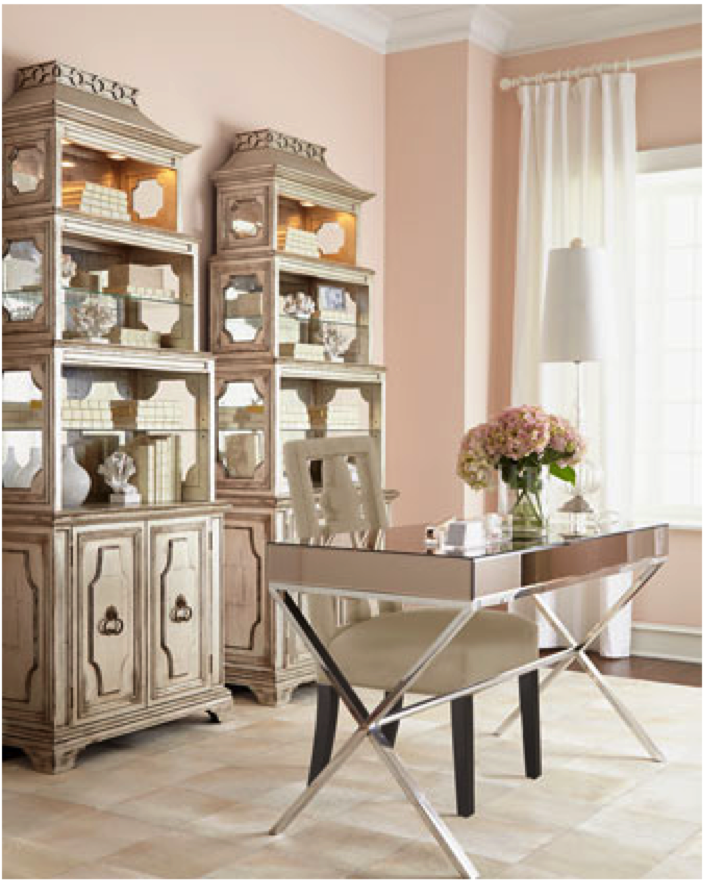 This is the colour of the walls that greeted me that day when I returned home from work. It was awful! 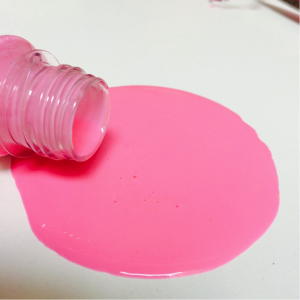 That pink looks so much better on these hatboxes that I photographed in London at Fortnum and Mason’s in the spring.  I love just about every colour but in the right place. 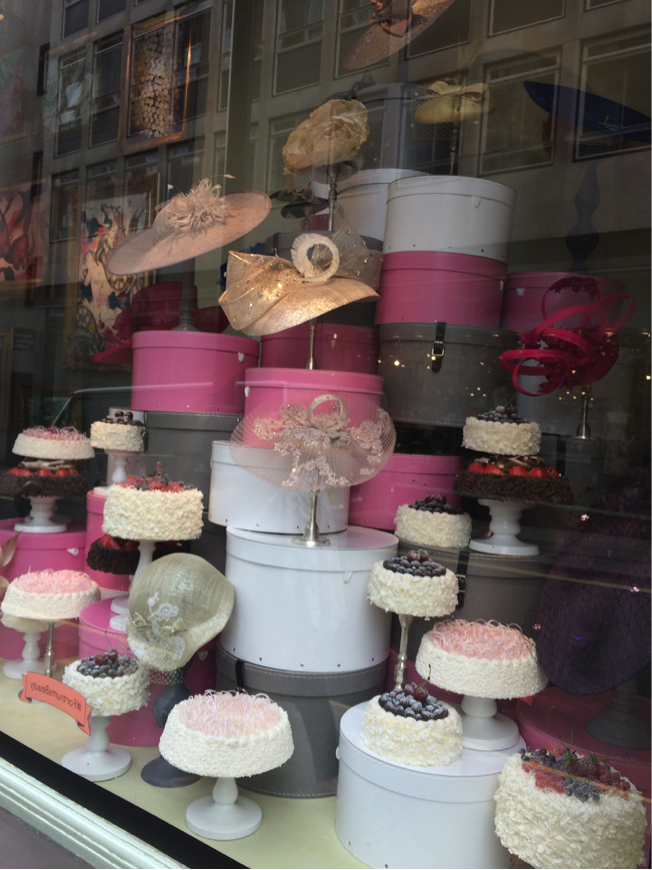 I learned the hard way all about the power of red and getting a paint sample first. I paid the painter and then spent the next weekend repainting my workroom with the right pink. I also learned how to paint. LESSON THREE: DON’T CHOOSE A SINGLE COLOUR UNTIL THE LIGHTING IS INSTALLED OR YOU AT LEAST KNOW WHAT BULLBS YOU WILL BE USING. It used to be that  incandescent lightbulbs were your only choice for lighting.  Not so anymore. 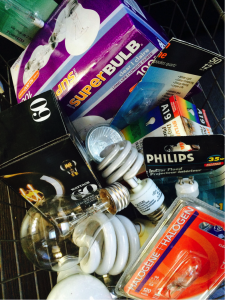 Test your colour in the proper light before you buy!

Lighting is a tough taskmaster and if you don’t test your colours in the lighting you are going to use….. you will find yourself in a similar situation that I found myself  a few years ago. It was a rush job. My client’s brother was moving into a house and needed colours and a kitchen and floors. There was a lot to do. So everything was a rush. And although I carefully picked all the colours with the client I did it before the pot lights were installed. BIG MISTAKE. After the kitchen and the painting was finished the client called in a panic to say the colours looked awful. I arrived and to my dismay he was right. They were awful and I could not figure out what had gone wrong. I was thinking the kitchen guy had used the wrong paint. I imagined tearing it all out and being bankrupt…..   I was worried. A few minutes later, my client, while I was waiting for the kitchen guy to call me back, started complaining about how expensive LED light bulbs were. I looked up and sure enough there were hideous bluish/gray LED’s in the pot lights. The contractor and some contractors think they  know everything…..NOT…….had told my client that Halogen was not worth it and LED were better and cheaper in the long run. Fortunately my client and I were able to scavenge the wrappers for the bulbs out of the garbage and he returned them and bought halogen. Once installed the kitchen was beautiful. So now the lighting conversation is just as important as the colour conversation. So whether you are using pendants. Like these beautiful hand blown globes I saw in London last year. They sort of look like big pearls. 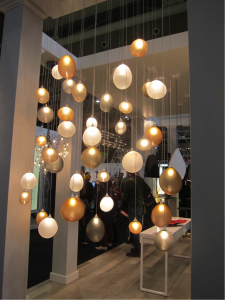 Or floor lamps and tables lamps and sconces. These modern LED lights were at Maison in Paris last year. 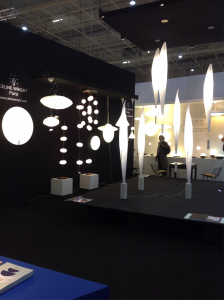 Or something as simple as recessed lighting or something you invented yourself ….know that the lighting will change your colours.  And need to be factored into your colour decisions. 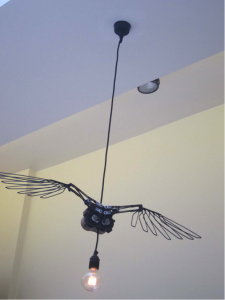 Choosing colour can be a challenge but following the right steps is important. If you would like some help pick up the phone and call me at 416-577-4944 or email me at roz@rozmorgandesign.com 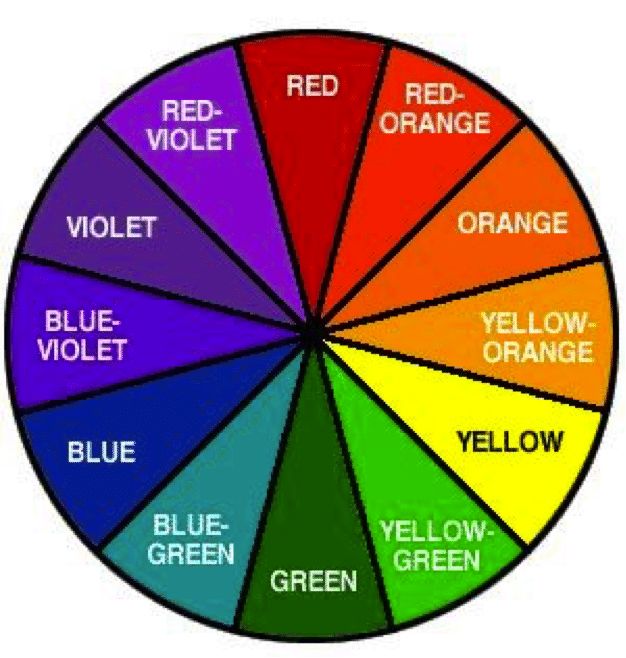